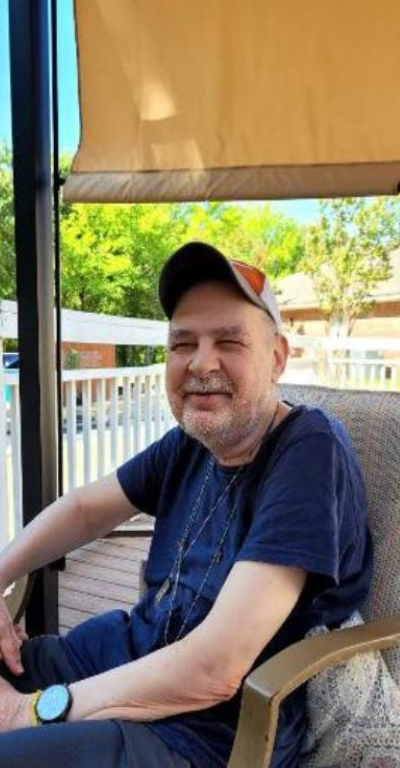 As we approach our 55th anniversary, August 16, 2022, we want to share some of the resident’s musings, now and periodically throughout our celebration year.

We thought we would start with a resident who has been with us for an impressive 21 of our 55 years.

William “Bill” Weldon sits on the outside deck at Cedar Lake Nursing Home often. Taking in the breeze, Bill ruminated about his life and shared some of his most memorable tales.

A self-proclaimed “Texas boy through and through,” Bill’s life dream was to own a ranch, like his grandfather. He began to grin real big as he recalled being put on a bull once to ride. He said: “That wasn’t for me;” although, he went on to study Agriculture at Kilgore College.

After college, he moved back to his home in Fort Worth, and due to health reasons, Bill became a resident of a Nursing Facility in the area. It was there he met the love of his life, Rachel. The two became one in 1988 and moved to five acres she owned near Lake Athens. They enjoyed their time together so much while there, along with her two sons, until the couple moved to Cedar Lake Nursing Home in 2001.

Bill smiles when talking about Rachel, and that is what most of his conversation centers on when possible. She remains a part of him since her passing. “Honey flowed from her,” he said. “She was extraordinarily nice, and a preacher too,” he ended. Rachel’s son Scott Mendez was the 1997 PRCA World Champion Bull Rider and inducted into the Bull Riding Hall of Fame this year. Her son, Michael Andrew Ortiz is a businessman who has traveled the world according to Bill.

Bill said his greatest joy in life was being married to Rachel.

These days Bill is busy visiting his friends and said he loves his home. Bragging on the activities, love, and care from staff to talking about enjoyable foods. He was looking forward to meatloaf today. It reminds him of Rachel. Relating he would be 68 years old next month, “but I don’t feel like it,” he said.

Bill is fanatical about football to this day, and said there was a time when he was younger; he thought if he could be a professional football player that would allow him to buy a ranch. Following with a laugh, he said “the only problem was, I can’t play football.” Yet, he said UT was going to have a good season this year and spouted statistics, coaches, and all-star player names explaining exactly why the season was going to be worth the watch. “When UT plays Alabama watch out-the coach used to be the play caller at Alabama,” he proclaimed.

As he lamented a bit over world affairs today, he said: “I’m not so old I’m ancient, but I’ve seen things turned upside down a bit.” Bill says he’s happy in his life and lives it fully every day. He has a firm handshake and a ready smile. Be sure to stop and say hi when you’re visiting Cedar Lake Nursing Home, and chat it up with Bill about all things football and you’ll hear so much more.